Case Study: How a small biotech firm in a competitive industry became the most talked-about booth on the trade show floor

BioStatus is a UK based biotech research and manufacturing firm. They have been in operation since 2000 and exhibit at conferences and trade shows to gain exposure.

Your trade show booth may have this common problem

Roy Edward, marketing director for BioStatus, had been experimenting with different ways to make a splash at trade shows, “it’s very difficult to get visibility as a small niche player among a lot of large multi-national companies.” BioStatus had exhibited several times with negative return on investment: very few leads, and a lot of wasted time and money; “we rethought our approach a couple years ago after a bitterly disappointing conference in Baltimore.” For the next show, “we understood the kind of effort we needed to put in for this particular conference – we had to go in guns blazing.”

How to be the #1 booth at a trade show

BioStatus’ goal was to stand out amidst dozens of larger, more established firms. JK Expressions worked with Roy to create a theme around caricatures. First, we drew BioStatus’ executive team, and these caricatures were included in marketing materials before the conference.

Then on expo day we set up BioStatus for maximum visibility; the caricatures were projected on our 32” LED screen (visible from 20+ feet away). Our color printer was all set to provide one-of-a-kind gifts for attendees.

At a conservative biotech conference, people getting their digital caricatures drawn stood out right away. “A crowd surrounded us all day – so many customers came and had their caricature drawn. When I stepped back and saw all these people watching, including our competitors, that was wonderful! We scored a massive hit at the conference.” 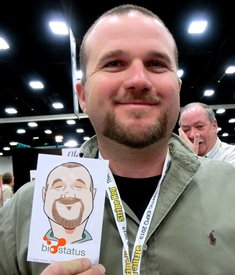 Over six hours of the show we did drawings for the attendees, and caused a ripple effect that sent a steady stream of traffic to the booth: prospects would excitedly show their caricature to colleagues and sent even more people to BioStatus’ booth! Many people didn’t want to get their picture drawn – they just wanted to watch our artist at work. This gave Roy and his team plenty of opportunity to connect with potential customers in a fun, relaxed setting.

Make an impression that lasts for years

We created a sign-up sheet for attendees to leave their name and email addresses so BioStatus could follow up with them later. The caricatures were then uploaded to BioStatus’ website, “We sent a cheeky email  with a download for their caricature – it was a fun way to round out the whole experience.”

Roy was thrilled, “this was a very effective way of adding visibility and getting a lot more traffic.” And BioStatus stuck in prospect’s minds long after the show was over, “people have been emailing us from the conference and making jokes about it.”

For a small firm in a competitive industry, caricatures turned out to be the perfect way to drive traffic and connect with attendees;  “We’re small and we have limited resources, but we can get away with doing things a little bold if it makes an impression. JK Expressions created a crowd, energy, noise and laughter, and was a completely new compelling way to attract prospects on to our territory!”